ESALQ was visited by leaders of Canadian universities 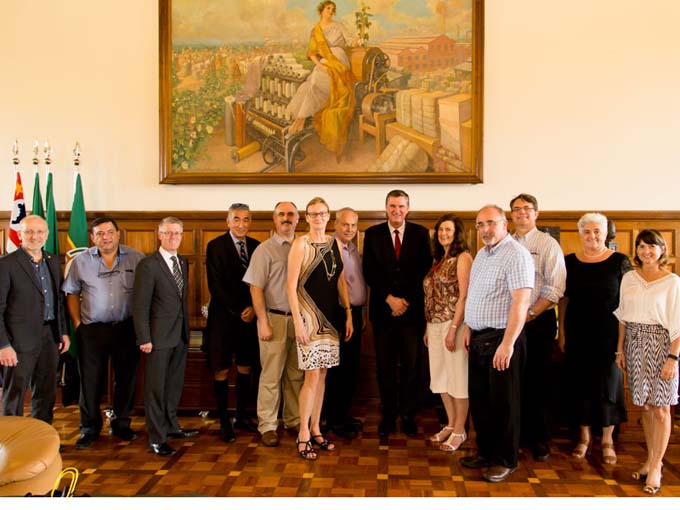 The Luiz de Queiroz College of Agriculture received last Monday, November 30th, a delegation of leaders from different institutions of higher education of Canada. The purpose of the visit was to attend professors and researchers interested to propose projects of partnership.

According to ESALQ vice-dean, Professor Durval Dourado Neto, the central management of USP prioritizes the university internationalization and such visits are part of a large project that facilitates contacts with foreign universities of excellence. “Such actions encourage our professors to develop more projects of international character. ESALQ is ranked as the fifth best university in the world in agrarian sciences according to US News Ranking, in a manner which is important the establishment of partnerships that promote this international insertion and Canada is certainly part of that agenda”.

The Canadian group arrived in Piracicaba early in the morning and was welcomed by the Professor and member of the International Relations Committee, Clarice Borges Demétrio. “This group of directors of universities is here looking for common interests to develop conjunct projects in academic level. The first contact is an interinstitutional survey, and during the whole day, they were presented to our graduation programs”.

In the afternoon, they were welcomed by the ESALQ dean, Luiz Gustavo Nussio. Later, they watched an institutional presentation by Professor Clarice Demétrio and, throughout the day, they were presented to the following graduation programs: Plant Physiology and Biochemistry, Bioenergy, Animal Science and Pastures, Agricultural Systems Engineering, Entomology, Plant Pathology, Genetics and Plant Breeding, Plant Science, Forest Resources and Soil and Plant Nutrition.

To Clarence Haverson (Executive Director, Association of Canadian Faculties of Agriculture and Veterinary Medicine), the leader identified a wide opportunity of academic collaboration with ESALQ. “We were impressed with the research lines developed here and the possibilities of student exchanges and the realization of projects of distance education”, declared.